Soil is the largest terrestrial carbon storage, mitigating the effects of global warming. However, it is releasing 1.1 Gt of carbon, which is 20% of fossil fuel combustion. However, methanogenic bacteria are absolutely anaerobic and cease to produce methane even in a slightly oxidized state, such as relatively slow water movement. We aim to reduce methane gas emissions with the management of soil pore structure and water infiltration.

Asia is the food base of the 21st century and contributes to the world's food production, but at the same time, methane emissions have become a major problem due to the wetlands and rice paddies. Methane gas emissions can be reduced by optimizing the soil and water environment without major environmental changes. 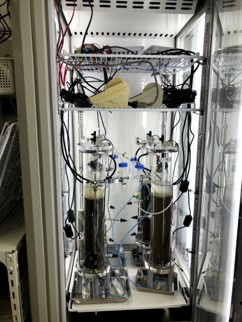 Methane gas emission is measured in a growth chamber. Temperature and humidity are controlled to simulate subtropical and temperate climates.