Viruses, which are microorganisms, cause diseases such as infectious diseases to humans, animals and plants. Even though viruses invade into the body, they do not develop ill unless they replicate. For example, it is impossible to replicate one's own copy if the nucleic acid (DNA, RNA), which is the virus's genetic information, is cleaved in viral genomes. For the first time in the world, we have developed an "artificial nucleic acid cleaving enzyme" that is an "artificial scissors" that cleaves the nucleic acid of this virus. We have already succeeded in developing "artificial scissors" that can cleave influenza virus RNA within 5 minutes. Furthermore, we have succeeded in suppressing the growth of human papilloma virus (HPV), which is the causative virus for cervical cancer, using artificial DNA cleaving enzymes.

Currently, there is a great deal of damage from the plum pox virus (PPV) that infects cherry genus such as plum and peach. The famous sight of plum blossoms in Ome City, Tokyo has been infected with PPV, and the sight of the plum blossoms that has been known for many years is disappearing. As a national project, we are promoting the development of “artificial scissors” suitable for PPV. This is not just about research and development, but also about protecting the culture of the plum that we have inherited from our predecessors. Challenges to protect important cultures are now being developed based on the innovative technology at Okayama University. 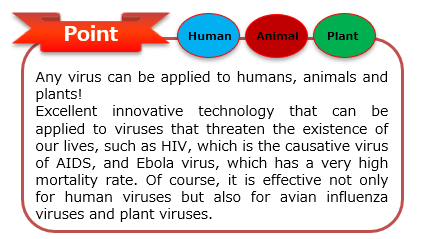