Biofouling on the surface of submerged objects has caused technical and economic problems in the marine industry worldwide. Once sessile organisms such as barnacle settle, a lot of efforts and costs are needed for removal of them. Organotin compounds were widely used as antifouling paints from 1960’s. Due to the high toxicity of organotin compounds to marine organisms, the use of organotins has been banned since 2008 worldwide. Therefore, the development of effective, safe, and environmentally friendly antifouling agents is strongly demanded.

We are trying to develop the environmentally benign antifouling agents exhibiting no toxicity by using naturally occurring organic compounds as structural motifs. We previously designed and synthesized hybrid organic molecules which consist of geraniol and butenolide. These hybrid molecules were found to be showing strong antifouling effect and no toxicity. These results reveal that hybridization of the two biologically active moieties resulted in the enhancement of the antifouling activity.
Field tests of these synthetic hybrid molecules in the sea will be carried out in the future. We will evaluate effectiveness and continuousness of antifouling activity by the field testing and aim at the practical application as antifouling paints. Realization of the practical use would enable us to improve the ship’s fuel efficiency and reduce the transportation cost. 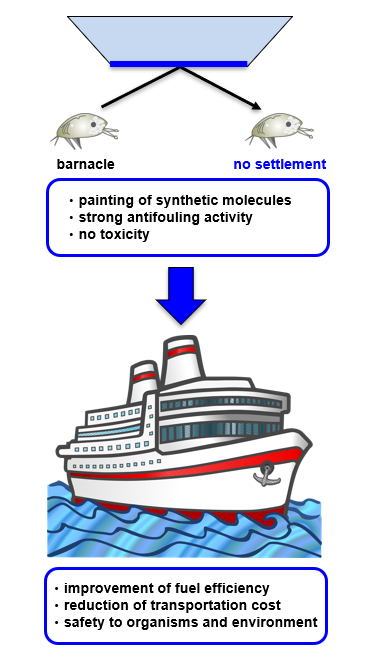