Our eyes have photoreceptor cells which convert light energy to membrane potential to generate the vision. Patients who have lost photoreceptor cells in hereditary or acquired diseases have no treatment option at moment. Retinal prosthesis is a medical device to replace the function of dead photoreceptor cells and play a role to send electric signals to the brain through the remaining neural cells in the retina which connect to the brain. We, as a team of multidisciplinary researchers together with small-sized companies at the local area, have used photoelectric dye molecules to stimulate the remaining retinal neurons to generate the vision.

We are planning to supply at a cheap price the photoelectric dye-coupled thin film retinal prosthesis to the blind people all over the world. No one left behind in the world is a basic concept in this project. Retinal prosthesis with multielectrode array system is now sold at an expensive price in US and Europe, and this cost is not affordable to most people in the world including Japan. Japan has maintained national health insurance system since 1961 to provide medical services at low cost to all people. Recently, however, expensive new drugs and medical devices which have been included in the health insurance system put a heavy burden on the finance of the system. A new device at low cost will be provided by industrial innovation, and thus, people’s good health and well-being will be maintained at equal opportunity all over the world, leading to reduced inequalities in the world. As partnerships for the goals, we are working as a multidisciplinary team which consists of experts in universities and companies.

Our way to come and go 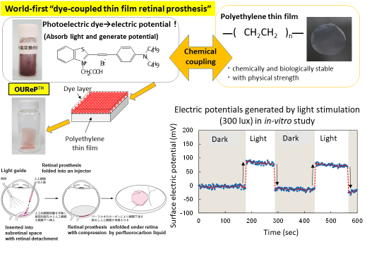