Offshore wind is the most promising energy source for a 100% renewable energy society. But conventional wind turbines can harvest small amounts of wind energy only near shores due to the constraints of water depth or electric transmission.

The Autonomous Kite-Sailing Energy Harvester generates power by a kite-sailing float with hydro turbines. Due to its autonomous sailing-based system, it can harvest vast amounts of wind energy even in the pelagic zones and does not compete with fishing operations. The hydro turbines are compact, and this system does not require tall supporting towers or deep water anchoring. Then it is cost-effective.

We have been developing the Hydro-VENUS turbine to utilize for the Autonomous Kite-Sailing Energy Harvester. It is a flow-induced oscillation based hydro turbine using columnar pendulums. Due to the simple geometrical shapes of the pendulums, the Hydro-VENUS is cost-effective, light-weight and high-strength. Its patents are acquired in Japan, EU, US, China and Australia. We have established the Hydro-VENUS Co., Ltd. 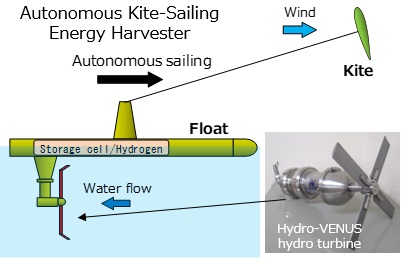 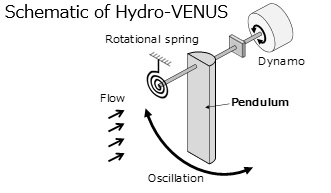